The hunt for waste, in all its forms, is at the heart of production strategies, as they constitute a lot of obstacles to performance. Waste of time is one of those aspects on which managers focus their efforts to reduce its scope, as it is particularly penalizing. They exist in particular during series changes, which involve unavoidable operations, especially in a context where production must be as flexible as possible to meet changing demand. Reducing these series change over times is, therefore, a major challenge and the SMED method has been developed precisely to solve that.

The changeover times: what is it all about?

Let’s take the example of a machine that makes it possible to manufacture the same product, but in several references with, for each of them, different characteristics, such as the diameter of the part. Moving from production from one reference to another, i. e. the same type of product but with a larger or smaller gauge, involves changing the mould, template or tools. The machine must be stopped for a certain period of time to make these adjustments, as well as other necessary operations (cooling the machine, cleaning if necessary…). It is in this time interval, the interval of series change and during which the equipment is immobilized, that poses a problem and, if it is too large and/or too frequent, hinders productivity and performance.

To reduce these changes and the costs they generate, the reflex has long been to favour mass production, but this approach has its limits. Starting with the fact that, very often, non-conformities are only detected at an advanced stage in the production chain, when correction is the most problematic or even impossible.
It is, therefore, a question of finding a compromise between the need to produce better and with a minimum of interruption, and that of adapting production to demand, both in quantity and variability (more personalised products, being one of the main trends in current demand).

The origins of the SMED method

The SMED (single minute exchange of dies) method aims to meet the real challenge in production management, which is to reduce production change overtimes.

Developed by Shingeo Shingo for Toyota from the early 1950s, this concept required some twenty years of work and reflection on the part of its author to be clearly formulated.

This Japanese expert was looking for a solution to the problems posed by bottlenecks on production equipment, where the chain was considerably slowed down.

How can this SMED help to reduce these series change over times?

To ensure that operations are as external as possible, and thus reduce machine downtime, it is essential to start by identifying which operations are really necessary and eliminating those that are not. These may come from old operating procedures, which have not taken into account errors or opportunities for improvement identified in the field, as production progresses. The digitization of the operating mode is a decisive development in this direction, since it facilitates its updating and makes it available to operators in its readjusted form.

Considered an asset for continuous improvement, the SMED method recommends the development and application of work instructions, as they set standards to which employees are called upon to comply when performing operations associated with series changes.

Picomto is the web and mobile solution for creating and consulting visual operating modes. Picomto’s operating methods contribute to the improvement of production series changes. For more information, contact us! 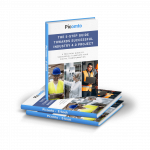